Looking for a great home in Clearwater? If you are moving from another state, one with much higher home prices, Florida real estate seems like a bargain investment. The problem comes in after you buy Florida real estate and try and procure homeowner’s insurance to protect your investment from fires, people hurting themselves in your home or theft.

Its not all Sunshine

Let’s face it, while the Sunshine State has plenty of sunshine, it also has some darker sides to it as well. Things like hurricanes that 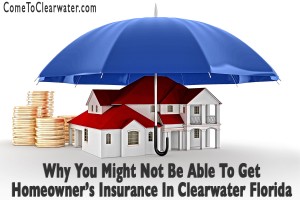 destroy properties, flooding and sinkholes that pop up all over the place. In fact, a few years in a row of rather destructive hurricanes sent many large insurance companies running. They had large losses paying homeowners for claims from the hurricanes. Then they packed up and left.

Now there are a number of smaller insurers who do insure in Florida. Premiums are high because of the risk involved. The smaller number of companies, along with a state run insurance program, are the only choices. In this case, competition is not keeping prices down, due to the smaller number of companies. Larger companies, who have brand recognition and the ability to spread the risk nationwide, bailed. They are now only 17% of the market in Florida.

How larger companies do it

Larger insurance companies have the ability to keep prices lower because they can have their customers share some of the risk. After Hurricane Isabel in 2003, many homeowners in areas that were not hit as hard found their insurance rates going up. For example, while parts of Maryland were hit hard, and areas like Baltimore City and Annapolis were badly damaged and flooded, other western counties only had minor wind damage.

However, those western customers had their rates raised the next time they renewed their policies… whether they had a claim or not. It may seem unfair, and it is, but it is one way that bigger insurers stay in higher risk areas and keep premiums for those customers reasonable.

If you can’t get private insurance and you have a hard time finding a big carrier to insure your home, you can always check out Citizens Property Insurance Corporation. Citizens was formed in 2002 from the merger of two other entities to provide both windstorm coverage and general property insurance for home-owners who could not obtain insurance elsewhere. It was established by the Florida Legislature in Section 627.351(6) of Florida Statutes as a not-for-profit insurer of last resort, headquartered in Tallahassee, Florida, and quickly became the largest insurer in the state.(1)

So Florida home prices may not be as high as some other places, and you CAN find insurance, but be prepared to have to look around to find coverage.

If you are thinking about buying a waterfront home in the Clearwater FL area and would like to learn more about some of these and other issues, give Deb Ward a call today! 727-216-9247

Harbor Bluffs waterfront Florida Real Estate is very sought after for its beautiful neighborhoods that include waterfront and non-waterfront properties.

If you’re looking for great water front living in Florida, Harbor Bluffs is the place for you. If you want Florida real estate in a waterfront community very close to the beach, don’t miss Harbor Bluffs. There is a home there for everyone, large and small. 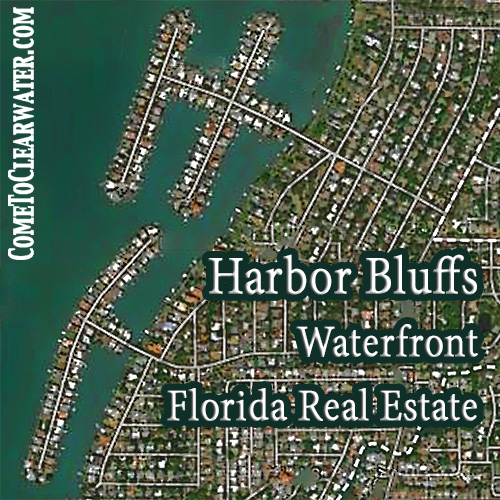 Harbor Bluffs in Largo Florida is a large development with waterfront and non-waterfront properties. It is well established and highly desirable Florida real estate. Many neighborhoods have waterfront views on one side or both sides of the street. Homes range in size from 1,700 sq. ft. to well over 4,000 sq. ft. Non-water front properties start in the mid $300,000. Water front real estate properties are either on the intercoastal waterway, or have quick access to the Gulf of Mexico via the bay.

The dual waterfront neighborhoods are streets where the intercoastal waterway lies on one side, and bay access on the other. Intercoastal side homes range from $500,000 to $700,000 and gulf access sides start in excess of $1,000,000. Newer homes are following the new zoning restrictions that require that all homes built have the living area at least 12 feet above sea level.

Homes in Harbor Bluffs were built from the late 60’s through the 80’s, although some have been rebuilt and can be much newer. Many people buy homes to renovate them, others demolish and rebuild. There are also buildable lots available, that if water front are in the neighborhood of $500,000 for the lot. Many have swimming pools with brick pavers, a cozy fireplace, and plenty of room to have family gatherings. The neighborhoods are well laid out and the perfect place to raise a family.

Harbor Bluffs is minutes from Indian Rocks and Belleair Beaches. These white sandy beaches are a great place to relax and spend a quiet Florida day. There is plenty of boat access both in the Harbor Bluffs neighborhoods, and the public access in Largo. This is Florida living at its finest. 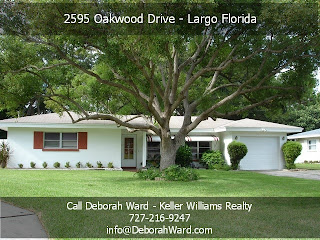 This is a great opportunity to purchase a 2 bedroom home with a large backyard with plenty room to install a swimming pool and store your boat or RV, for only $125,000

This block home has an attached one-car garage and is tucked back in desirable Keene Forest, just off Keene Road and East Bay Drive in Largo. It is nestled on an oversized pie-shaped, shady lot with great curb appeal.  The living room features a wood burning fireplace and laminate flooring. The remodeled kitchen is just off the formal dining area. There is one full bathroom, plus a second bathroom with shower and toilet. The bonus Florida room and large screened porch overlook the massive backyard. Just down the block is a little park with a pond, swing set, many shade trees and benches to relax and take in the serene surroundings. This home is conveniently located just a short drive to shopping, restaurants and beaches.

For more information or to schedule a private showing of this property, please call Deborah Ward & Associates at 727-216-9247, or email info@DeborahWard.com.

Deborah Ward & Associates is a top selling team at Keller Williams Realty Suncoast. Deborah and her team’s knowledge, experience and caring personalities have all contributed to their real estate success.  They pride themselves in their track record of overcoming obstacles to get to the closing table.  Their motto is“Everything closes at Deborah Ward & Associates!”

If you’re looking for great condo living in Treasure Island, Florida, Paradise Island Towers is for you. A treasure in paradise for those on a budget. 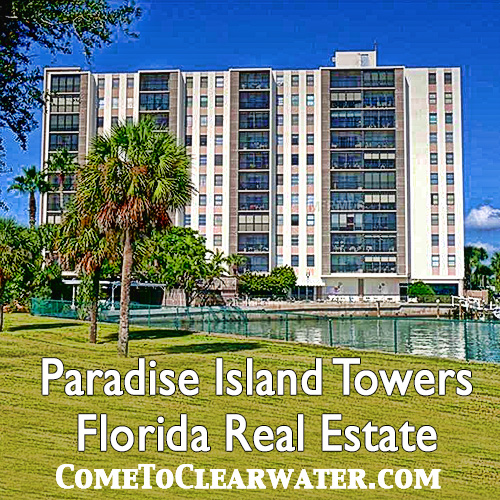 Prices will vary based on views you have and what floor the unit is on. Units are bright and airy, immaculately maintained and in “move in” condition. The building has great amenities, including a doorman, waterfront deck, a large gorgeous heated pool and boat slips available to rent suitable for sailboats. This is Florida real estate at its best!

A two bedroom unit is bright and spacious. You walk into a living room/dining room combination with a good sized kitchen. There are also a spacious breakfast bar, a dishwasher, stove, microwave and refrigerator. There is a utility room/laundry room right off the kitchen.

Check out one of the units that we have listed here!

Waterfront real estate and Florida real estate. The thought of owning a piece of land right on the beach, bay or gulf sounds heavenly. It can be, but you need to go into ownership of Florida waterfront real estate with your eyes open. While looking through listings, there are a few things you should look for. 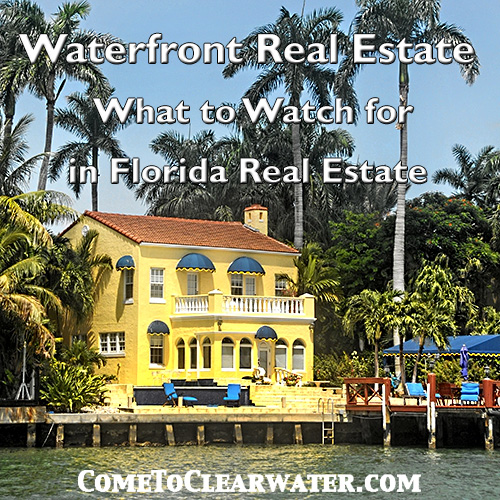 First, never buy waterfront real estate sight unseen, or rely on internet pictures. Even what some would consider a “waterfront palace” may mean it’s a huge house on a postage stamp sized lot. Or you could end up with an old wooden house full of rot or termites. Sounds common sense, but it bears repeating.

As you walk through a Florida real estate property look hard at what you see. Look for holes. Look for rot. Look for places that termites could find a way into the home. It doesn’t take much for them to get in and cause thousands of dollars in damage. Look for white build up on metal. That means salt has damaged it. Look for the same thing on outside electrical cords, outlets and meters. Salt is highly corrosive. Look for water stains inside in the ceiling. They are rather hard to paint over and can mean that the roof leaks or has had water intrusion during a storm or hurricane.

Another thing to do is ask neighbors about where the beach or water line is and has been. Beach erosion is a serious problem, and can mean that you lose inches or even feet of your property over time. Speaking of erosion and hurricanes, Tampa has been hit by hurricanes, but the Gulf coast usually is missed by the bulk of hurricanes. That said, they are highly damaging, and even if they miss, the high amounts of rainfall they bring can cause flooding, erosion and damage to the property and home.