Sand Key real estate is some of the most beautiful property in Pinellas County, FL. 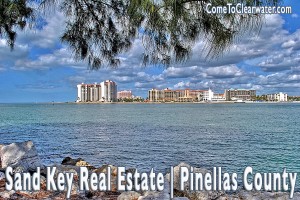 Sand Key is a barrier island just south of Clearwater Beach in Pinellas County, Florida. It has medium and high end residential real estate. It also has a hotel, an area of cute, small shops and restaurants and a public park.

Gulf Side or Intracoastal

Sand Key is a great place to live in Pinellas County. Access to the island is over the Sand Key Bridge on the north side of the island, and the Belleair Causeway to the east. The multi-million dollar high end homes are found on the Gulf side of the island. These are not only large homes but also homes with land and all of the amenities you could ever want. More affordable single family homes are along the intracoastal waterways. Saying that almost every home is waterfront isn’t a stretch.

Condos are also available on Sand Key and again, the amenities are abundant. What are they? Well, here goes! Let’s start with Bayside Gardens. Found on the Intracoastal Waterway and affordable at $200,000-$400,000 per unit. Bella Rosa is a beachfront condo community near Sand Key Bridge. Units are 2,300 square feet, 3 bedroom 2 bath units that sell for between $800,000 and $1.5 million. Cabana Club is also Gulf side and beachfront and has plenty of Victorian charm. Units sell for between $400,000 and $650,000. Crescent Beach is beachfront on the Gulf, but has water views of the Gulf, Intracoastal waterway and Clearwater Beach. It has a huge range of unit prices to fit any budget, ranging from $300,000 to $1.2 million. Dan’s Island is beachfront with units starting at $400,000 up to $750,000.

There are more, plenty more! If you want to see these or any of the 9 more condo communities available on Sand Key, contact Deborah Ward, “The Irish Realtor”!! 727-216-9247

If you’re looking for a community that has a place for everyone to live, Belleair Beach may just be the place for you. Belleair Beach is located on a barrier island south of Sand Key and Clearwater Beach. You can find homes in the millions, or a small place just to call your own.

Belleair Beach real estate is a fun mix of huge million dollar mansions that face the Gulf of Mexico on the west side of the island. These have all the bells and whistles, top of the line 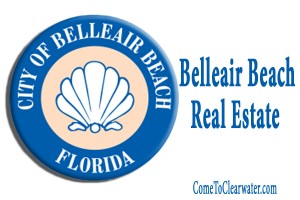 updates and technology. Other homes are nice sized and located on the intracoastal waterway. They are less expensive and generally are updated and in good shape. Some may need some care and repair. Then there are even some smaller 1950’s Florida ranch houses to be found. These gems retain the old Florida charm with colorful bathrooms and Terrazzo floors. They may need some work, but the charm more than makes up for it. There’s something for everyone.

That’s one thing that statistics won’t tell you about. The sunsets over the Gulf and sunrises over the intracoastal waterway. The close proximity of water means an easy beach day – no long drives or traffic hassles. Homes with a place to keep your boat are easily found.

If you are looking for luxury real estate in sunny Florida, Belleair is just the place for you. With the majority of the homes in town going for in excess of $1 million, luxury is definitely to be found. 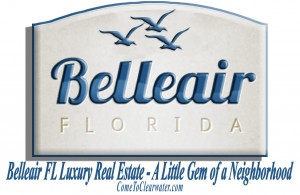 Belleair is known to be a relaxed and peaceful place. With its share of celebrity residents, it has a small town feel with nearby big city amenities. It is one of the last areas that is a strictly residential beach community in Pinellas County. Established in 1950, it is located on a barrier island. Belleair has the best to offer in luxurious waterfront living for families, retirees or those looking for a comfortable vacation home.

Amenities in the town include 4,500 feet of white sandy beaches, three resident-only beach parking areas, a public boat ramp at the 7th Street Park Boat Ramp and the Municipal Marina, eleven public parks including Morgan Park, Bayside Park, and Crossman Park, and two City maintained tennis courts and a basketball court. There is also world class shopping, dining and entertainment only minutes away in Tampa.

Homes have appointments like pools, spas, multiple bedrooms, high end chef’s kitchens, bonus rooms, high end baths, wood, limestone and marble flooring, granite countertops in kitchens and baths alike, spacious screened lanais, acres of spectacularly maintained grounds, fireplaces, formal dining and living rooms, amazing entertaining spaces and more. Some homes have pool houses and other outbuildings for the privacy of guests or other hobbies. Depending on your budget, the sky’s the limit. Some estates are asking $17 million or more. This is luxury real estate!

If you are looking for a place to live with a great small town with all the luxuries of more exclusive zip codes, Belleair is the place you should be looking. 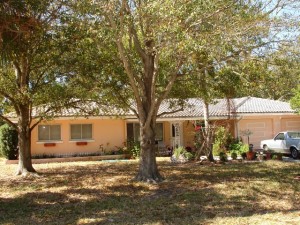 What a great opportunity! This value priced home has tons of potential from the oversized lot to the newer master suite this home could be the home of your dreams. The cozy fireplace in the living room creates a “heart of the home” feeling. The oversized screened lanai is perfect for BBQ and entertaining. Some TLC and this house will have it all!

Desirable Belleair Bluffs location, minutes away from beaches, shopping and restaurants. This neat and clean 4 bedroom, 3 bath, 2 car garage pool home has it all! Great split plan with two master suites, large family room and bonus Florida room perfect for entertaining! The oversized patio has been recently paved and the sparkling heated pool makes this a great value property in the heart of Belleair Bluffs.