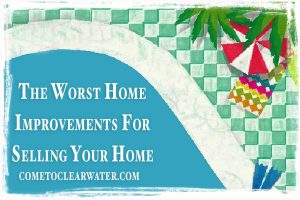 You’re thinking about selling your home but you know it needs some upgrading. You have a lot of ideas but you aren’t sure which will bring you the best return on your investment. Here are five things you shouldn’t do.

Pools sound like a good idea, especially in Florida, but they cost a lot to install, between an average of $20,000 to $60,000 or more. It will add value, but only about 6 to 11% for an in-ground pool doesn’t make the price tag worth it. An out of ground pool adds zero to value, so again, not worth it.

If you have a garage and think that making it into extra living space, think again. Adding space onto a garage can cost up to $60,000 and only brings about a 60 percent return on investment. That’s not bad, but the problem becomes how the buyers will view it. If they don’t need the extra space won’t like it and if you make the garage itself into something like a man cave or family room may mean that those who would want a garage instead will look elsewhere.

Think making your deck into a sun room would be a good idea? Don’t! A sun room will actually drop your home’s value. The home improvement itself will actually lose 54% of it’s value. Keep the deck. Don’t think about adding an outdoor kitchen to that deck or patio area either. A barbecue is always a good addition, all the other additions aren’t and don’t add much, if any, value. If you have a bedroom set up as a home office, make it back into a bedroom for sale showings. If you think adding a separate space designated specifically as a home office think again. You can spend up to $30,000 constructing it and may only get about half of your investment back when you’re ready to sell.
Don’t make these costly errors.