You’re bored with how your home looks, or you know you want to make updates to it. So do you do “taste specific” or go with the current trends? Yes. No. There are ways to make your space your own without making it impossible to sell later.

You can start with things that are easily changed later

These are things like painting the walls, changing the 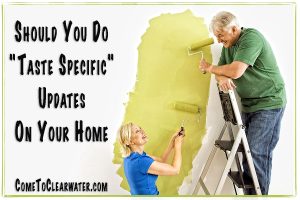 carpet, updating blinds or curtains, etc. All of these can easily be changed to more traditional or neutral colors later. Let’s say you want to paint your living room a color palette from your favorite sports team, and put a mural of the team on one wall. Yeah, that’s going to be a problem later when you sell, until you cover it with a neutral color later. For now it’s how you want it, later not so much, but how a possible home buyer may want it.

Doing things like changing the type of flooring can be more permanent, but can also help you be able to personalize now and sell later. Taking out old, dated carpeting is a good thing. Replacing it with hardwoods is even better. You can use throw rugs to personalize, add splashes of bold color, but replace them later with more neutral ones. Be careful about the type of flooring you choose, though. Cheap vinyl that looks like wood is obviously a bad choice.

These are things like tile floors and walls, countertops. Choosing to make these changes aren’t a no-no. Just be more conservative in your choices of these items. If you want to go granite, go granite, but something more neutral and less stand out.

You can always use furniture, throw rugs, towels, curtains and artwork to make a space specifically to your taste. That way making it more easily less you later is simply accomplished.