Your Realtor came, inspected, and gave you a “honey-do” list of things that needed to be accomplished in order to get your house ready to show and sell for the best price. You did most of the things, all the big stuff. Good enough, right? Wrong! Leaving even small problems can put your home in the “fixer-upper” category.

The list was long and, you were thinking, a bit over zealous. I mean after all, they surely didn’t mean you really had to touch up the paint behind the bedroom door or 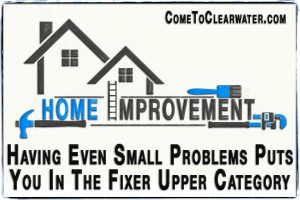 in the closet. Who looks there anyway? Everyone, that’s who!

Besides, you’re thinking, they’re going to repaint anyway. Better to do a few obvious things on the list and no one will notice the rest. The problem is that they do notice. This is especially true if the homebuyers are first time buyers who have always had a landlord, or their parents, fixing things around their living spaces.

It may be as simple as a paint touch up or replacing a wall switch cover, but for someone who doesn’t know how it’s a big deal. Even for those who have previously been homeowners they may know how easy it is to fix those little things, but they may be thinking “ok, so what else is wrong here?”

Have you ever watched those HGTV shows like House Hunters or Fixer Upper? In House Hunters they often have just those kinds of brand new first time buyers. Have you noticed how nit picky those house hunters are? Watch an episode or two and see how quickly they turn their noses up at a home that has a few minors to-do’s left on the list. The Realtor will try and minimize it with a “that’s a simple fix” but they are having none of it.

Then there is Fixer Upper

Chip and Joanna Gaines find a few houses that are fixer uppers and then they fix it up. The problem for you, the homeowner, would be that shows like that show potential buyers all of the possible “skeletons in the closet” like bad wiring, etc., that they think could be wrong with your home because you missed those little details.

So take the time and do it all!

The housing market has improved and homebuyers have to be aware that the chance of a bidding war is out there. Do you know how to give yourself the best way to win that bidding war? Here are a few things that should put your offer at the top of pile.

First thing you should do as a homebuyer, is make sure you have your financing in place before you start your house search. Find the lender you wish to use, apply and do everything the lender requires in order to 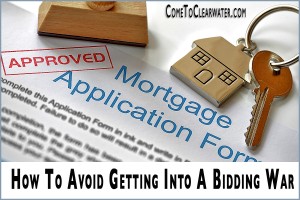 give you a preapproval letter. Have it in hand before submitting an offer.

Keep a folder with current pay stubs, bank statements and all of the paperwork they will need to process it once you do have the pre approval. In some places, it’s common to accompany your offer with a financial information sheet detailing your job history, salary and bonuses, 401(k) balance, how much you have for a down payment, and where the down payment money is. Show the seller that you are serious and able to purchase their home, and you will win the war.

Next, make a fair offer. In a seller’s market, that means make a full price offer. If there have been other offers made, consider an above asking offer. Also make sure you have a higher than average deposit.

Another good idea is to keep the amount and type of conditions out of the offer. Things like contingencies for selling your current home, or extended times for financing approval. Some people will say drop the home inspection contingency, but that isn’t a good idea. Instead, read all disclosures and ask if the sellers have had a home inspection prior to listing the home.

If that is acceptable, you can still have your own inspection in order to provide information on the home’s condition. You can also have an inspection done prior to making an offer, or bring one along with you when you tour the home, and if they feel it is acceptable then make a non-contingent offer. If you do this you should have a home inspector ready almost the day the home goes on the market.

Being prepared will get you the home you want. Be prepared!