So are there really lucky charms? Can you use something like a St. Joseph’s medal to hurry the real estate selling process along? Well, it certainly can’t hurt, so let’s look at some of the more well-known lucky charms of real estate. Selling your home takes a lot of things. It takes good strategy. It takes a lot of patience. It takes finding a great Realtor who has a consistent track record. It also takes luck! 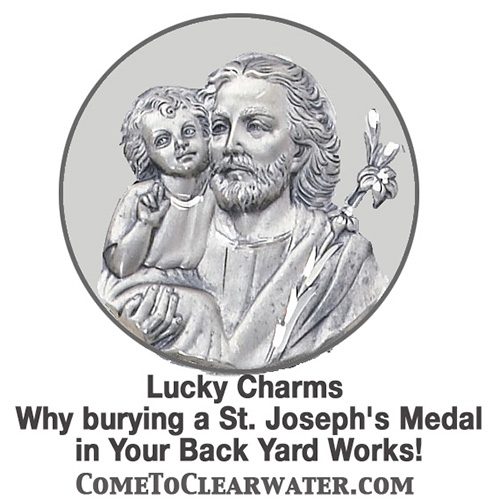 St. Joseph is known as the patron saint of real estate. Not a bad place to start! There are many who believe that burying a statue or medal of St. Joseph in the yard will help sell their home. Does this lucky charm work? Well, some homeowners and Realtors swear by it. As soon as the “for sale” sign goes in the yard, St. Joseph goes in the ground. Believers know of incidents where homes don’t sell and then someone buries St. Joseph on the property and the offers flood in. What can it hurt?

Not a big believer in the power of saints? Well, what about numbers? An even bigger real estate superstition is about numbers. So which numbers? That depends. Some are general some are culturally specific. There is a general superstition about these numbers: 13, 3 and 7. Some people actually fear the number 13. The scientific terms is “triskaidekaphobia.” It is a common phobia, worldwide. From Christianity (Jesus and the 12 Apostles added to 13) to other faiths or just generally, people will avoid 13. Friday the 13th anyone? To avoid issues many builders will number floors of buildings every number except 13. At the very least, many people believe that the number 13 is unlucky. Now the numbers 3 or 7 are another story. For various reasons these two numbers are considered lucky charms not just in real estate but other areas of life as well.

In other cultures other numbers are lucky or unlucky. For the Chinese, 8 is lucky because it is pronounced very similarly to the same word for wealth and prosperity, but 4 is unlucky, because it sounds like the Chinese word for death. The Chinese have other superstitions for real estate as well. Door color, which way the home faces and other things inside that relate to Feng Sui.
So, be smart, but try some lucky charms too! Who knows, it could work!