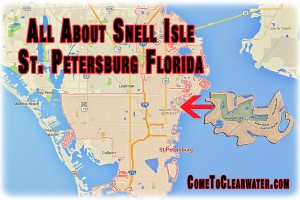 druggist from Kentucky. He moved to the St. Petersburg area in 1900 and began purchasing properties in the area to develop. Those properties were then developed into upscale neighborhoods, commercial areas and also public parks. Snell Isle was one of those neighborhoods and it was named for him.

In 1926 The Renaissance Vinoy Golf Club and Resort opened on the island. It is still there and is currently on the National Register of Historic Places. It’s also the home to the St. Petersburg Woman’s Club, which Snell built on Coffee Pot Bayou. There is a memorial on the island to Snell, its founder.

So come check out the Isle when in St. Petersburg.