St. Petersburg, Florida is on the west coast of Florida in Pinellas County, Florida. It is often referred to by locals as St. Pete, and formally shortened its name in 1994. It sits on the peninsula between Tampa Bay and the Gulf of Mexico. 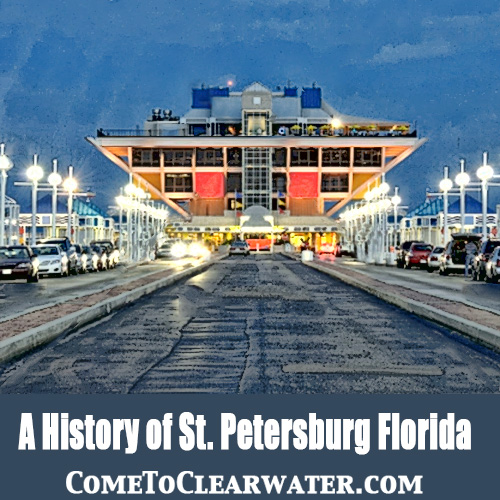 St. Pete was founded by John C. Williams, who migrated there from Detroit, Michigan, and by Peter Demens. Williams purchased the land in 1876, and Demens brought the terminus of a railroad there in 1888. St. Petersburg was incorporated on February 29, 1892. The city was named after Saint Petersburg, Russia, which was where Peter Demens was born and raised.

According to a local legend, Demens won the right to name the town in a coin flip with Williams. Williams then, as the loser, got to name the first hotel. He named if after his birthplace. The Detroit Hotel still exists downtown, but has been turned into a condominium. The oldest running hotels are the historic Pier Hotel, built in 1921, formally Hotel Cordova and The Heritage Hotel, built in 1926.

Philadelphia publisher F. A. Davis turned on St. Petersburg’s first electrical service in 1897 and its first trolley service in 1904. The city’s first major industry, wholesale fish sales, was established in 1899 when Henry W. Hibbs, a native of Newport, North Carolina, established his wholesale fish business at the end of the railroad pier. This pier extended out into the shipping channel. Between 1906 and 1908 the shipping channel was dredged and the deeper channel opened St. Pete up to increased shipping.

As with its surrounding sister cities, St. Pete has a great history to go with its great beaches!