Safety Harbor Florida has a storied history, from Indians to Spanish Explorers. It all contributed to what Safety Harbor is today.

Safety Harbor has been inhabited since the Stone Age 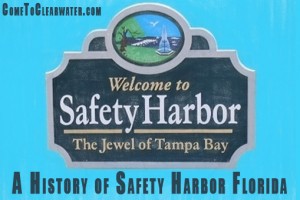 The area of what is today’s Safety Harbor has been inhabited since the Stone Age. Historians know this after a 6,000 year old spearhead was found in the Marshall Street Park in 2008.

The first known named inhabitants were the Tocobagan Indians. The tribe name came from one of its chiefs during the 1500’s. There was also a town bearing the same name and it’s believed on what is today’s Safety Harbor. The Tocobagan constructed ceremonial and communal mounds for what is thought to be burial sites. There is an intact ceremonial mound still visible today in Philippe Park.

Other sites around the area found pottery, copper, shell and stone. The shells found in these mounds were used to pave city streets.

The area was discovered by Hernando De Soto

De Soto was a Spanish explorer who led the first expedition into the southern US. He was looking for gold, silver and a passage to China. What he found was Florida and the New World.
Another important Spaniard in Safety Harbor’s history was Panfilo de Narvaez. Narvaez sailed to the New World from Sanlúcar de Barrameda on June 17, 1527, arriving on the West Coast of Florida near the Rio de las Palmas in April of 1528. Today, that site is known as the Jungle Prada Site in St. Petersburg.

He acquired the land that is now Safety Harbor. He introduced cigar making and citrus to the Tampa Bay region. He is buried in Philippe Park, which was his former plantation, though the exact location of his grave is unknown.

Safety Harbor is a great historic area. Find a piece of it for yourself.