Dunedin, Florida, like it’s neighboring towns and cities, has an interesting and ethnic history. The earliest inhabitants, like the surrounding territory, were native Americans. It was the later settlers that set the tone for today. 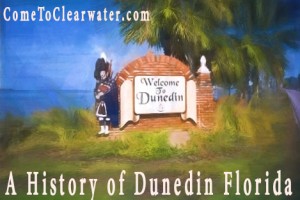 In the 1800’s Scottish families settled the area. The name of the town, Dunedin, is also the Gaelic name for Edinburgh (Dùn Èideann) Edinburgh is the capital of Scotland. Two Scotsmen, J.O. Douglas and James Summerville, named the settlement. Douglas, Summerville and others brought their Scottish customs to the area.

One of the earliest settlers was John W. Marston

Marston was a carpenter and citrus farmer. He provided jobs for other settlers who came to the area. Dunedin is the oldest town south of Cedar Key, Florida. It became one of Florida’s chief seaports and trading centers because it had the space to accommodate larger sailing vessels.

Dunedin was incorporated as a town in 1899. Residents demanded it due to pigs that were constantly running through town. In order to ban livestock from the town it had to be incorporated as such. In 1913 it became a city.

Just before and during World War II, the Food Machinery Corporation had a factory in Dunedin. The factory was the site where the Landing Vehicle Tracked was developed by Donald Roebling and others from Roebling’s alligator. The LTV was used in WWII and training on them was done at the factory.

During that time the school and its students were housed in the Hotel Dunedin. This continued until 1944 when the program was transferred to Camp Pendleton in San Diego, California.
Today Dunedin is a great area to live and visit. It still celebrates it’s Scottish heritage and history.

Come on by and see for yourself.