Clearwater, Florida is in Pinellas County, Florida, on Tampa Bay. It has a long and interesting history. Its history goes back thousands of years to its original inhabitants and has always been an area that draws people to live and play. 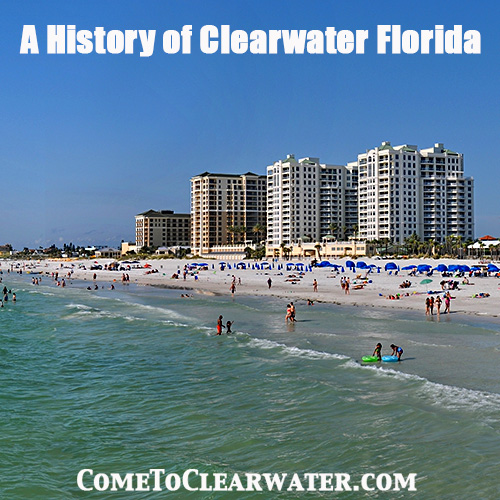 The original inhabitants of the area were the Tocobaga Indians. These Indians lived in villages around Tampa Bay. Evidence of their existence is now found in the communal and ceremonial mounds that have been excavated in the area. While the biggest are found in neighboring Safety Harbor, they have been seen in the entire area.

Spanish explorers were next. They were attracted to the area by the natural mineral springs. In 1528 Panfilo de Narvaez, a Spanish explorer, landed in the area. Hernando de Soto followed in 1539, though de Soto is often credited with the “discovery” of the area. De Soto’s and his men were fascinated by the unspoiled beauty of the area and the mineral springs that the Tocobaga Indians used.

Around 1835 the US Army built Fort Harrison to be used as an outpost during the Seminole Wars. It was located on a bluff overlooking Clearwater Harbor. It later became part of a development called Harbor Oaks (just the most BEAUTIFUL area to live!). Archeologists excavated the site after Mark Wyllie discovered an ammunition bunker while digging to plant a tree in his yard. Early settlers in the area included the Stevens, Stevenson and McMullen families, who farmed large tracts of land. The area has always been known in some manner as Clearwater, at one point it was Clear Water Harbor. This was probably because of the fresh water spring that flowed near where the present day City Hall building is located.

During the American Civil War, Union gunboats repeatedly raided the city’s supplies. Most here fought for the Confederate Army. Clearwater was incorporated in 1891, and its popularity as a vacation destination grew after railroad magnate Henry B. Plant built a sprawling Victorian resort hotel named Belleview Biltmore just south of Clearwater in 1897. During World War II, Clearwater became a major training base for US troops destined for Europe and the Pacific. Virtually every hotel in the area, including the Belleview Biltmore and the Fort Harrison Hotel, was used as a barracks for new recruits.

Today it is a great area to live, work and vacation!