Sinkholes in Florida are not uncommon. Some areas are more susceptible to them than others, but as a general rule the entire state has the same kind of porous carbonate rocks that help create sinkholes. You want to buy a property in Pinellas County and wonder if you need to worry about sinkholes there.

Why do sinkholes happen? 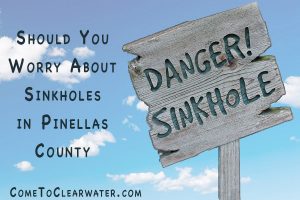 Sinkholes are caused by the wearing away of the limestone rock that makes up the substrata of Florida. Limestone dissolves away over time leaving holes. Usually those holes are filled with water which holds up the surface.

There are generally three types of sinkholes: collapse sinkholes which are frequently triggered by fluctuations in underground water; subsidence sinkholes which generally form gradually; and clay shrinkage which vary seasonally and with annual precipitation changes.

So is Pinellas a worry?

To some extent, yes, anywhere in Florida has some risk of sinkholes. On the west coast in the Tampa area Pasco County and towns in Pinellas like Tarpon Springs and Palm Harbor have a lot more sinkhole activity than further South in Pinellas County.

Here is a great resource for checking if your potential property is in a dangerous area… you can search by zip code for an overview! https://sinkholemaps.com/pinellas-county-fl-sinkhole-subsidence-properties/

So go ahead, buy in Pinellas!