Spanish style homes are popular in the Clearwater and St. Pete area. The style refers to particular types of architecture that was brought here by the early inhabitants of the area, the Spanish, and continued influence in the area later through the immigration of people from other areas like Cuba. The styles are similar, but have some differences. Here’s a run down of each. 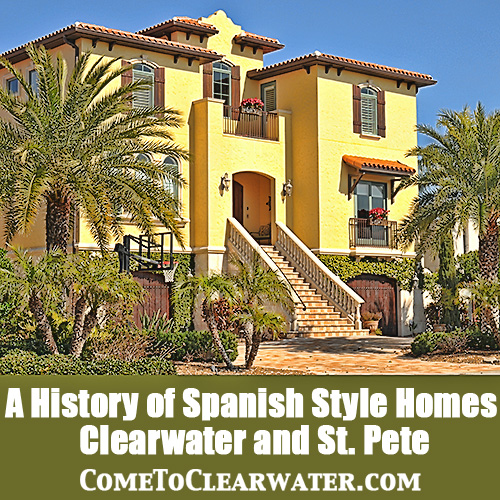 Spanish Baroque: These Spanish style homes came from the architecture of the 17th and 18th centuries and are very ornamental. Subsets of this style, the Plateresque and Churrigueresque styles, are especially intricate and feature curved shapes and a lot of visual movement.

Mission Revival Style: The style began in the 1890’s is more regularly found in California, since it is based on the missions of the Spanish Catholic colonists built in the mid- to late-18th century. These Spanish style homes borrow from the missions’ architectural elements such as bell towers and roof parapets, and regularly feature recessed front porches.

Spanish Eclectic: Also called Spanish Revival, this style blends the mission elements together with elements of Moorish, Byzantine, Gothic and Renaissance styles. For instance, a simple mission bell tower and stucco walls might share space with more ornate details, such as turrets, ornamental tiles on floors and walls, stained-glass windows, and intricate wrought-iron bars over windows and balconies, a blend of the simple with the imagination.

Monterey Style: This Spanish style home is a variation of Spanish revival architecture, but its biggest difference is second story homes. These second stories almost always have a balcony that runs the entire length of the house and is shaded by the home’s main roof. It also commonly features things borrowed from the colonial revival style like front porch columns and triangular structures called pediments.

Whichever style you prefer, any of these Spanish style homes will fit well in Clearwater real estate as well as St. Pete real estate.